Clarence Thomas: The Supreme Court’s "Most Persuasive Exponent of Originalism" 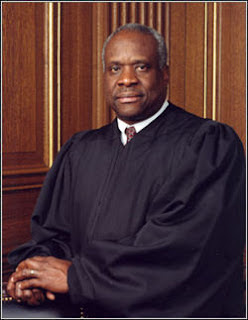 ...What’s interesting, and perhaps surprising, is that, 16 Court terms later, Thomas has quietly proved himself to be a serious constitutional thinker, who displays—for those sympathetic with his conservative jurisprudence, anyway—both great independence and considerable wisdom.

Thomas forcefully rejects the notion, long favored by liberals, that the Constitution is a “living document” and that Supreme Court justices should creatively adjust the meaning of its terms to afford more protection to minorities, to invent such unenumerated rights as the “right to privacy,” and in general to promote “progressive” ends that the Left can’t seem to win at the ballot box. Instead, he has become the Court’s most persuasive exponent of “originalism”—the view that justices should interpret the Constitution as meaning what it did to those who read the document when it was framed.

Since originalism is the jurisprudence most compatible with our republican form of government and the intentions of the Founding Fathers, it’s looking as though the first President Bush got it right after all when he declared, upon nominating Thomas, that he was “the best man for the job.”...

Here's the rest of this very good article, written by Stephen B. Presser and published in City Journal.
Posted by DH at 10:31 AM