"Secret" Pork Spending Threatens the Safety of Our Ship of State 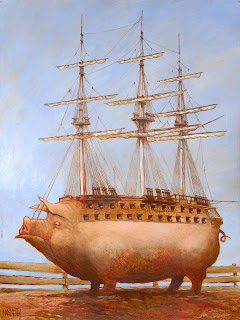 Letting the sunshine in on government pork spending? I guess not. Below are printed some excerpts from today's Bob Novak Town Hall column in which Novak explains how, despite the promises, the White House is conniving with the Democrats to hide pork barrel spending projects.

As part of "Sunshine Week" to promote transparent government, the Office of Management and Budget (OMB) last Monday was supposed to release a comprehensive database revealing the number and cost of earmarks since 2005. It did not. The word on Capitol Hill was that the OMB was muzzled by the White House for fear of offending powerful congressional appropriators.

Meanwhile, the new majority staffs of Senate appropriations subcommittees under Democratic control are privately soliciting individual senators for their requested earmarks, without much transparency. That would seem to make a sham of the pledge by Appropriations Chairman Robert C. Byrd to "place a moratorium on all earmarks until a reformed process is put in place."

Thanks partly to the outcome of the 2006 elections, members of Congress can no longer blithely earmark funds for unauthorized pet projects as they have done with increasing frequency. But in the dark recesses of Capitol Hill, lawmakers from both parties are continuing the pernicious practice as best they can. The question is whether they will be curbed by the Republican administration, the Democratic Congress, or both

OMB Director Rob Portman, a former member of the House Republican leadership, is a firm opponent of earmarks. On Jan. 25, he signed a memorandum for heads of departments on the collection of information about earmarks. It set forth a rigid timeline culminating in the posting March 12 of all this data on the "public Internet." What would be revealed would be a rare exposure of the murky world of congressional pork acquisition.

But just as the OMB was prepared to put out this information, it sent word to Capitol Hill that -- over its protests -- it was being kept under wraps by the White House to appease the appropriators. With Congress in the midst of the budget process, President Bush's team did not want to stir up the Hill.

All that was released last Monday was a compilation of earmarks in 2005, with few details. Portman publicly called it "an important first step towards providing greater transparency." In private, however, he said last week: "My hands are tied." Republican Sen. Tom Coburn, the scourge of earmarks, told me: "I think the American people should be very disappointed."

An even stronger example of the resiliency by the congressional pork purveyors is the Appropriators' non-compliance with the ethics bill that has passed the Senate 96 to 2 but has not yet been finally enacted. Coburn last Monday delivered a letter to Chairman Byrd, saying: "The committee's failure to make earmark information public would make a mockery of recently passed earmark reforms and would suggest to taxpayers that the Senate wants to continue to earmark funds in secret..."

Why not write the President and share your opinion about this manipulative move by the White House? It is one thing (and a very bad one at that) for Democrats to sneak around and spend "earmark" money against the law; it is another thing (and even more galling) that Republicans play the same game.