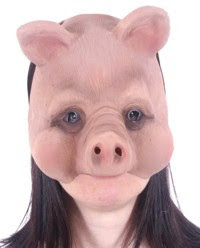 The Family Research Council is asking that your voice be raised against the latest round of "secret" pork barrel spending by our noble solons in government.

The new Congress came into town promising to end business as usual. It hasn't happened. With debate underway on an emergency supplemental funding bill to supply our troops in Iraq, liberals in Congress have been merrily larding it up with a raft of pork projects designed to buy votes for the bill's real goal: setting a deadline for pulling U.S. troops out of Iraq next year.

As a result, The Troop Readiness, Veterans' Health, and Iraq Accountability Act of 2007 is laden with measures like:

Let's tell Congress to get its act together and focus on our troops overseas. Their need for equipment and weapons is a real emergency - peanut storage and spinach subsidies aren't. Let's also tell our members of Congress that it's time to hop off the earmark gravy train and stop the explosion in pork barrel projects that has put the reputation of the U.S. House and Senate at new lows...

You can answer FRC's call by calling and writing your Congressmen and Senators today.
Posted by DH at 10:39 AM