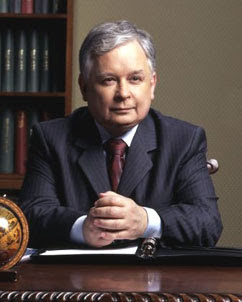 A press release from the World Congress of Families announced that Polish President Lech Kaczynski will give the opening address at WCF IV in Warsaw, May 11-13. President Kaczynski will also serve as Honorary Patron of the Congress. The theme of World Congress of Families IV is Beyond Demographic Winter: The Natural Family And The Springtime for Nations.

President Kaczynski has been critical of gay activism, recently noting that if the homosexual “approach to sexual life were to be promoted on a grand scale, the human race would disappear.” He has also expressed concern about falling birthrates across Europe and voiced strong support for religious values and the natural family.

Kaczynski assumed the office of President on December 23, 2005. In the 1970s, he was active in the Anti-Communist Workers’ Defense Committee, served as an advisor to the Solidarity movement, and later became an advisor to Poland’s first democratic president, Lech Walesa. In 2001, Kaczynski became Minister of Justice and was elected mayor of Warsaw in 2002. President Kaczynski is one of the founders of the governing Law and Justice Party.

The event is expected to bring more than 3,500 pro-family leaders, activists, scholars and parliamentarians to Warsaw in May. Among them, representing Vital Signs Ministries, will be Claire and I. We will be learning from the many provocative speakers lined up, interacting with other delegates in breakout sessions and social activities, blogging about the event, and helping out with the outreach there of Concerned Women for America.
Posted by DH at 1:05 PM