Hey! It's Not Fair to Quote Me! New Orleans Mayor Seeks to Escape Racial Conspiracy Remarks 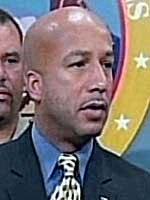 The Times-Picayune is following up on the New Orleans Mayor's recent warnings of some kind of race conspiracy:

...The Washington Post article, which recounted New Orleans Mayor Ray Nagin's speech Thursday to the National Newspaper Publishers Association, an industry group of papers that target African-American readers, said Nagin "has suggested that the slow recovery and rebuilding of New Orleans" is "part of a plan to change the racial makeup and political leadership of his and other cities."

That article supported the premise with a quote attributed to Nagin: "Ladies and gentlemen, what happened in New Orleans could happen anywhere. They are studying this model of natural disasters, dispersing the community and changing the electoral process in that community."

While Nagin didn't deny the comment, he accused the writer of the story, Hamil Harris, of purposely using it out of context in an effort to be provocative. He said his speech -- no copy was available Monday -- covered a broad range of obstacles the city has yet to surmount in its fledgling recovery. A racial plot was not one of them, Nagin maintained.

"My take on it is that it was some young reporter in the back of the room, looking for some way to get a nice story out," Nagin said. "He jumbled everything I said up, and brought some things in the middle of the talk to the front, and painted this picture that was just not what I intended to do, nor would I say..."