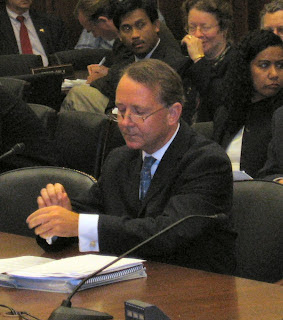 Lord Alton of Liverpool is 56 today.

This announcement from the Times (U.K.) put me in a celebratory mood. Despite the darkness of modern culture, the Lord keeps raising up guiding lights" to warn, teach and rescue. David Alton is one such fellow.

David Alton is a globetrotting crossbench peer who has reported on Sudan, Burma, Congo, Rwanda and North Korea. This week he has spoken in the Lords on the current crisis in Zimbabwe and asked a question about the cuts in the provision of English tuition for refugees and asylum-seekers. He is an opponent of abortion and euthanasia, the issues that prompted him to resign as Liberal Chief Whip in 1987. He served in the Commons for 18 years and was once “the baby” of the House. He was appointed a peer in 1997 and founded a human rights pressure group, Jubilee Campaign, in 1987 and is the author of 11 nonfiction books. He has three sons and a daughter and lives with his wife, Dilys, in Lancashire.

By the way, hitting on this link will take you to Alton's website, an appropriate way to learn more about his ongoing work in behalf of human rights.