What Would the Chavez Power Grab Look Like If It Happened Here? 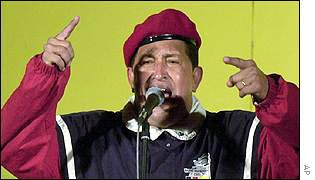 Among other things they envision, a Chavez-like takeover in the U.S. would equate to:

-- winning all 435 seats in the House and all 100 in the Senate, and packed the Supreme Court with nine sycophants that never rule against him;

-- asked his rubber-stamp Congress to let him legislate unilaterally including amending the Constitution, and 100% of the members of Congress voted for that;

-- decreed under these powers that he can run for re-election to the presidency for life;

-- plan to decree that cities and states will no longer be governed by elected mayors and governors, but by people's committees named by him;

-- owned or controlled all but a few TV and radio stations that either cover his endless speeches averaging 40 hours a week or risk losing their broadcast licenses;

-- created one political party and denied the rights of citizenship to recalcitrant members of opposition parties;

-- took over the Federal Reserve and spent the national Treasury as if it were a personal checking account;

-- funded his campaign with government money and publicly and repeatedly threatened government workers to vote for him or be fired;

And that's not all.