Most Americans Want to Win in Iraq 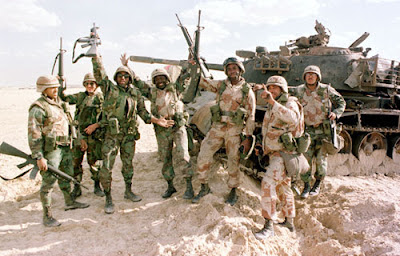 Wriing in the New York Post, Andy Soltis reports on the resluts of a major survey that you may not hear about anywhere else in the MSM.

In a dramatic finding, a new poll shows a solid majority of Americans still wants to win the war in Iraq - and keep U.S. troops there until the Baghdad government can take over.

Strong majorities also say victory is vital to the War on Terror and that Americans should support President Bush even if they have concerns about the way the war is being handled, according to the survey conducted by Public Opinion Strategies.

The poll found that 57 percent of Americans supported "finishing the job in Iraq" - keeping U.S. troops there until the Iraqis can provide security on their own. Forty-one percent disagreed.

By 53 percent to 43 percent they also believe victory in Iraq over the insurgents is still possible.

Despite last November's electoral victories by anti-war Democrats, the survey found little support among voters for a quick pullout of U.S. forces. Only 25 percent of those surveyed agreed with the statement, "I don't really care what happens in Iraq after the U.S. leaves, I just want the troops brought home." Seventy-four percent disagreed.

The survey was conducted before last week's House of Representatives resolution repudiating Bush's war policies. But by 53 percent to 46 percent, Americans said Democrats are going too far, too fast in demanding troop withdrawals...
Posted by DH at 10:16 AM