The Jaundiced Eye of the New York Times

They say that the pen is mightier than the sword, and for that reason they also say to tread lightly while criticizing anyone with both a warehouse full of ink and the inclination to use it against you.

But such is not the case with The New York Times, which has so discredited and marginalized itself through across-the-board, overtly slanted liberal “journalism” that its proud pen no longer cuts so deep and its venomous ink has lost its sting. Rather than objectively measuring the events of our day as America’s journalistic plumb line, The Times has become America’s journalistic punch line...

But as the “Gray Lady” shaves her credibility cranium buck bare in a Britney-esque breakdown, it’s no wonder that her circulation continues to nose-dive. Her formerly proud status as America’s premier news source has been replaced by her seedy reputation as America’s premier political operative for the far left-wing of the Democrat party...

There are more examples of New York Times bias than there are fathers to Anna Nicole’s baby, but for the sake of clarity, let’s focus on one of the most recent... 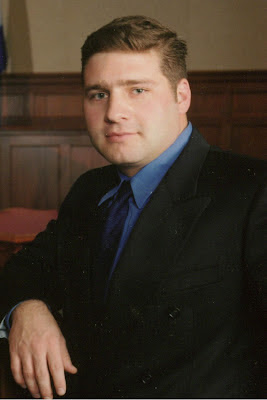 Thus Matt Barber begins a trenchant tale of the Times' malicious slander against Concerned Women for America. You can read his column here.

And, by the way, Barber isn't a fellow to mess with. In addition to holding a Master of Arts in Public Policy from Regent University, Mr Barber is a writer and editor, an attorney (non-practicing), a jazz drummer, and an undefeated heavyweight professional boxer! If you want to read more of Matt Barber, you can find him at TheConservativeVoice.com, Town Hall, and other conservative sites. Mr. Barber also serves (just since December) as the Policy Director for Cultural Issues at Concerned Women for America.

You may also remember Matt Barber from his being fired from Allstate Insurance Company simply for writing an article (from his own home and on his own time) defending traditional marriage. More on the story of his mistreatment by Allstate is briefly told in this article.
Posted by DH at 6:40 AM