Yet More Reflections on the March for Life 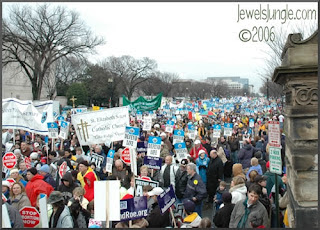 And now here are a few of Dick Loneman's comments from his first Vital Signs "field trip" to Washington, D.C. for the March for Life:

*** Refering to his later-in-life conversion to Christianity, Dick wrote: "To see what God has done for me by bringing me from where I was, to a place like this is more than I could ever believe. To share a weekend like this with friends who love Jesus so much is really an amazing blessing."

*** Moved by his hours in the National Holocaust Museum, he wrote, "When I saw pictures of the children and read of their plight there in the Holocaust Museum, it helped me understand (a little bit anyhow) just how terrible it was for them. How tragic and shameful! And how tragic and shameful also is the plight of the little ones in the womb of abortion-minded parents. They have so little chance if we don’t stand up for them."

*** "As I read Matthew 13:14, I think of the security guard at the Council Bluffs Planned Parenthood -- so angry, so profane. The passage reads, 'You will keep hearing but will not understand, and you will keep on seeing, but will not perceive.' And then the next verse says, 'For the heart of this people has become dull. And with their ears they scarcely hear. They have closed their eyes.' Father, please break through to him before it's too late."

*** "Today we were really blessed when Denny decided to go rent a vehicle. Otherwise, the wind and snow would have really limited what we could have done. This way we were able to see so much, including the Lincoln Memorial and the nearby statues and Wall honoring our men and women who served in the Vietnam War. Deeply moving. Just to the south of these is the Korean War Memorial where this engraved message meant so much to me: 'Our nation honors her sons and daughters who answered the call to defend a country they never knew and a people they never met.' When I saw that I thought too of how those of us who stand for life at the abortion clinics are standing for people we do not know. But God knows them even before He formed them in the womb. And, just as it was honorable and right for Americans to seek to defend life and liberty in southeast Asia, it is certainly honorable and right for Americans to do the same for the unborn babies right here at home."

*** "Because of having the vehicle, we also made it to the World War II Memorial. Very powerful. We were once again reminded of the tremendous sacrifice of the men and women that served our nation's interests -- and those of justice too. And, oh yes, that vehicle allowed us the blessing of going to a great restaurant in Old Town Arlington where George Washington and other leaders of our great country used to dine. We were graciously treated to a wonderful lunch there by a family that Denny and Claire knew, Brian and Gwen Mueller. That was really nice."

*** "On Sunday morning we started the day off with prayers together and a special observance of the Lord's Supper. Once again I was moved to thank God for His unending love for me. Another spiritual highlight of the day was a 'prayer drive' that we made around the D.C. area, especially the Congress, Capitol, Supreme Court, and so on. We prayed earnestly as Denny drove through the snowy streets for all the ones that make decisions about our country."

*** "On Monday we finally got to march for life. A tremendous experience! It started with a quick (but wonderful!) breakfast at a little deli near the Family Research Council headquarters. I had so much fun seeing my friends from Omaha treat the two gals behind the counter with such love and respect. And it was reciprocated too. There were several signs that Christians owned the deli, including crosses, messages, etc. but the nicest sign of all was their warmth. Then, of course, there was the March itself. I guess I feel inadequate to try and express what was in my heart that afternoon but I know I'll never forget it. And I pray that I'll never get over it either! Just to see so many pro-lifers with a heart for God’s little ones! And then to be able to thank God for being a part of this important witness myself! Wow! What more can I say but thanks be to God that we can all use whatever time and money and talents He has given us to do whatever we can to save the babies and help their moms and dads find the peace of Christ that we have found."
Posted by DH at 4:10 PM