More Reflections on the March for Life 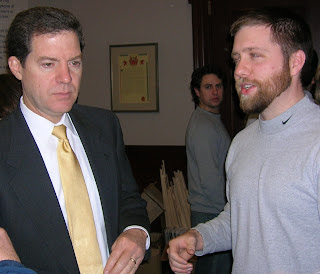 This time it's Matt Troutman's turn to comment about his trip to Washington, D.C. for the March for Life. Matt (who is shown here with Senator Sam Brownback at the Family Research Council offices) has been a terrific addition to the Vital Signs Ministries team in the last several years and his dedication, intelligence, good humor, courage, and spiritual strength have greatly added to our service for Jesus Christ. Matt has been deeply involved in the sidewalk counseling team, our Mercy Ministries, P.A.L. Nights, Book It! discussions, and much more. Along with his beautiful wife, Laura, the Troutmans have become trusted and valued friends to many. Here's Matt's reflections:

We commemorated (or more accurately commiserated) the 34th anniversary of the terrible Roe v Wade decision by participating in the March for Life in D.C. Our flight schedule allowed us to have two days before the March to see some of the sights around Washington. Seeing these with fellow pro-lifers made it all the more meaningful.

We visited the Holocaust Memorial Museum where we saw some horrible examples of what happened when a powerful, wicked regime decided that entire groups of peoples were sub-human. In addition to the genocide of the Jews, the museum displayed other atrocities of the Nazis. For instance, there were exhibits on the gruesome experiments their scientists performed on Jews. In another display, "Healers Turned Killers" the museum documented the Nazi "Operation T-4", in which handicapped and mentally retarded children were brutalized and murdered. Our visit here was a fitting prelude for the March, reminding us of how depraved is the society where life is so dramtically devalued. 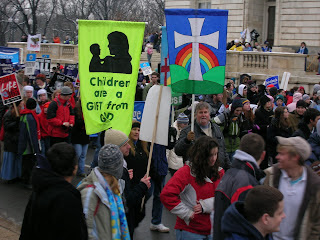 On Monday, the March for Life itself featured some great speakers, including two from Nebraska, Congressmen Lee Terry and Jeff Fortenberry. From the speakers' platform, we then marched several blocks to the Supreme Court. There were throngs of people everywhere. We couldn't get a view of the entire crowd then (nor afterwards since the March isn't covered by the Mainstream Media!) so getting an accurate estimate of the size was impossible.

The March culminated at the Supreme Court. It was hard to appreciate the beauty of that building, remembering that such a terrible decision as Roe v Wade was handed down there. There at the Court, the pro-lifers were confined to the street and sidewalk; we were not allowed onto the steps by the D.C. police. It was easy to feel helpless. Even after all of the Marches that have occurred every year, Roe v Wade is still intact. In fact, American culture seems poised to euthanize the elderly and attack embryonic life through research.

Of course, pro-lifers have felt this helplessness before. Indeed, every Saturday morning, we plead with women not to make a decision for abortion as we stand on the sidewalk in front of a Planned Parenthood abortion mill. In many cases, it doesn't seem to make a difference. But we go on witnessing and praying anyhow because that's what we're asked by God to do. And, on that cold afternoon in Washington, D.C...on another sidewalk thousands of miles away from home... we did the same things, the only things that will bring Roe v Wade to an end: we witnessed and we prayed.
Posted by DH at 10:43 AM