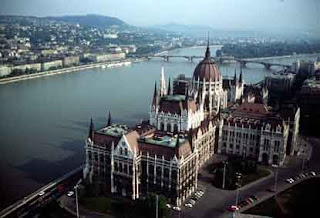 This news story about pro-life Christians in Hungary is of interest on two fronts: 1) It reminds us that fidelity to the Word of God requires Christians everywhere to prayerfully, peacefully protest the murderous actions of abortionists, and 2) It reminds us that causes connected to the Word of God are going to be treated unfairly and incompetently by reporters...even by reporters who claim to be religious themselves.

The story comes from BosNewsLife which describes itself as "an Internet news agency covering stories on Christians and Jews living in difficult circumstances for whatever reason, including persecution, as well as other hard hitting news stories from around the world." Their slogan is "Breaking the News for Compassionate Professionals." Yet the story about the pro-life Christians in Hungary is replete with the same kind of arrogant, distorted techniques one is used to in the mainstream media.

For instance, the reporter replaces the word "baby" as used by the March of Life for the Future by a word he/she prefers, "fetus." Bad journalism. In addition, the reporter adopts the condescending attitude of using quotation marks around such basic words as "silent" and "mourn" -- another obvious example of his/her unfounded sense of superiority.

By the way, I found another version of this story at, of all places, the English-language edition of the People's Daily Online (China). It was much shorter -- but much closer to proper journalism too.
Posted by DH at 10:56 AM