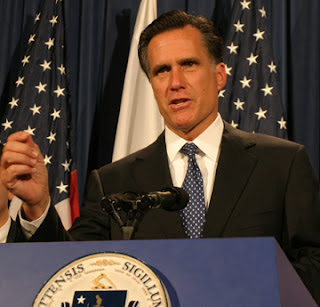 It turns out that Mitt Romney, the Massachusetts governor who has high hopes of securing the G.O.P. nomination for President in '08, has a few items in his record that will turn off conservatives in a profound way. For instance, the Mormon governor now hails as a champion of family values and repeatedly draws attention to his opposition to same-sex marriage. However, when running against Teddy Kennedy just two years ago, Romney went out of his way to win over homosexual voters by promising them "more effective leadership" in establishing "full equality for America's gay and lesbian citizens" than Kennedy had shown.

Hmm...more aggressively gay-friendly than Ted Kennedy? Does Romney really think that's the sort of promise that will win over America's values voters?

And yet, that's not all that concerns conservatives about Romney's record. You'll learn more in this story from the Daily Herald (Boston). You'll see there that Romney's duplicity in this matter is not at all pleasing to homosexual activists either.

Stick a fork in him, he's done. The Romney candidacy ends before it ever got started.
Posted by DH at 9:40 AM