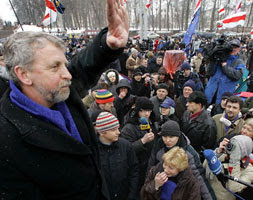 Former opposition presidential candidate Alyaksandr Milinkevich received the European Parliament's Sakharov Prize for freedom of thought in Brussels on December 12, an RFE/RL correspondent reported. "This is not only my prize. Together with me, this prize also goes to all those Belarusians who are struggling for freedom, all those who came to the square this spring [during and after the presidential election] to defend their dignity, all those who were and still are imprisoned, those who were expelled from universities and who were fired from their job," Milinkevich said in his acceptance speech.

Milinkevich noted that the EU -- which is barred from funding activities in other countries not sanctioned by their governments -- lacks an efficient mechanism of assistance to pro-democracy movements under undemocratic regimes. Milinkevich advocated establishing a European "antidictatorship fund" to allow the EU to take direct action against authoritarian regimes. He pledged to donate his 50,000 euro ($65,900) check linked to the prize to the European Parliament to support victims of political persecution in Belarus.

Read the moving story of Milinkevich's acceptance of the award and of the injustice he has fought against right here.
Posted by DH at 11:15 AM