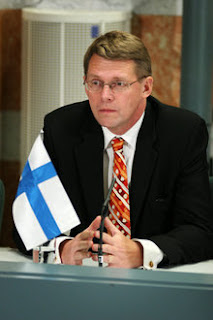 Here's an intriguing report sent along by Radio Free Europe, describing the speech of Finland's Prime Minister Matti Vanhanen to the European Union a few days ago. The Finnish EU Presidency is soon to be superseded by Germany.

Vanhanen, in characteristic understatement, said he was "not altogether sure that Russia is heading in the right direction." He noted that "one of Finland's priorities was to strengthen the EU's policy towards Russia.... At the informal [October] summit in Lahti, we had a good discussion with Russian President [Vladimir] Putin, and the EU succeeded in speaking with one voice to Russia.... Russia is important for the EU [and] we are bound together by many ties, but it is fair to say that certain trends in Russia give us cause for concern....We need to see a firmer commitment to democracy, the rule of law, and the market economy. We do not want Russia to go in an authoritarian direction. We are fully entitled to be concerned at the way things are going in Russia."

Vanhanen went on to say that "the construction of Europe is a work in progress while there are still democratic black holes like Belarus so close by. A disgrace to Europe. There should not be any such places left in Europe."

Germany succeeds Finland in the rotating presidency on January 1. The Foreign Ministry, which is controlled by former Chancellor Gerhard Schroeder's Social Democratic Party (SPD), has drafted a plan independent of Chancellor Angela Merkel and her Christian Democratic Union (CDU-CSU). The ministry seeks to promote German and EU ties to Russia on the basis of an expanding network of interrelationships.
Posted by DH at 5:27 PM