Not Good: The Loss of John Bolton 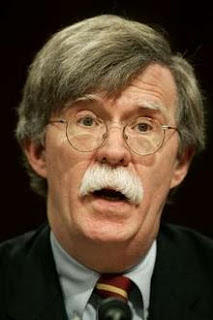 In the latest edition of the Evans-Novak Political Report (which you can get sent to your own e-mail box by going right here), Bob Novak had this review of what happened with John Bolton...

...The decision by John Bolton not to pursue confirmation as UN ambassador was his own, though it is not clear that the President Bush wanted to go through the parliamentary maneuvers needed to keep him in office.

The victory by Senators Christopher Dodd (D-Conn.) and Joseph Biden (D-Del.), both presidential hopefuls, is a serious blow to hopes for bipartisanship in the next Congress. The Dodd-Biden vendetta, despite Bolton's excellent service at the UN, tells the story of what Democrats really consider "bipartisan."

Lameduck Sen. Lincoln Chafee (R-R.I.) provided the decisive vote keeping the Foreign Relations Committee from reporting Bolton's nomination, with the probability that he would have been approved by the full Senate. Republicans are enraged by Chafee, who was heavily supported for renomination by the White House and the GOP establishment. Chafee had privately indicated that after he was elected that he would vote for Bolton, but his loss apparently relieved him of that responsibility.

The White House suggested the long-vacant deputy secretary of State's post or a Cabinet-level counselor's post for Bolton were possibilities. While he was not actually offered either post, Bolton appears to have had enough of dealing with vindictive Democrats.

Bolton did an extraordinary job at the UN, especially in achieving Security Council unanimity on the Korean question. But Dodd was implacable in preventing his confirmation as he had been earlier in keeping Otto Reich from being confirmed as assistant secretary of State for Inter-American Affairs. Both foes of Fidel Castro, the two were unacceptable to Dodd as enemies of normalizing relations with Communist Cuba.
Posted by DH at 11:59 AM