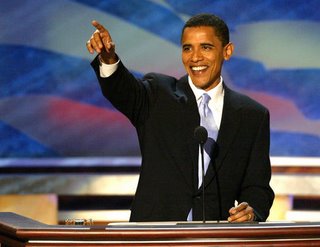 With Senator and current media darling Barack Obama set to star at the Sunday morning service at Saddleback Church (courtesy of Rev. Rick Warren) in a couple of weeks, it is proper to remind the congregation of just what kind of "Christianity" the former Muslim has converted to.

Here then is a brief review provided last month by Coloradoan Donna Schoenrock, a young Native American wife and mother of 3.

An excerpt --In 1999 he was the only Illinois State Senator to vote against a bill barring early release for (criminal) sex offenders.

He voted against filtering pornography on school and library computers and he voted for sex education for kindergarten children through the 5th grade...

In February 2004, his wife, Michelle, sent out a fundraising letter, which actually stated her concern over the rise of conservatism in the Country, and that the ‘so-called’ partial-birth abortion was a legitimate medical procedure that should be protected.

In 2003, as chairman of the next Senate committee to which BAIPA (Born Alive Infants Protection Act) was sent, Obama prevented it from even getting a hearing. BAIPA, by the way, stated that all live-born babies were guaranteed the same constitutional right to equal protection, whether or not they were wanted.

In 2001, he voted “present” on a bill to notify parents when their minor children seek an abortion.

What in the world is Rev. Warren thinking? You might ask him yourself, encouraging him to protect his congregation, protect his own reputation and protect the integrity of the Church at large by refusing such a man as Barack Obama the esteemed and incredibly influential position behind the Saddleback pulpit.

Here, for instance, is the note I sent...

I write with a sincere and urgent appeal for you to change your mind about inviting Senator Barack Obama to address the congregation there at Saddleback Church. I'm sure you mean well but allowing a champion of abortion and homosexual legitimacy to win such powerful publicity (not to mention the higher rgard in the evangelical community he can garner) by preaching in your pulpit is terribly irresponsible.

Ministering to non-believers (or perhaps you believe the Senator to be an erring brother) is a Christian duty, to be sure. But to allow either type of person to continue in their sin, even to further promote it as Obama certainly will by the elevated esteem your invitation will give him, is naive and wrong.

Please invite the Senator for a cup of coffee but dis-invite him from speaking there at your church.