“What Does Hillary Think?” 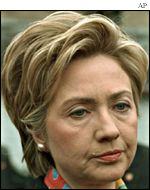 New Report Raises Disturbing Questions about Hillary Clinton and Abortion
Judicial Watch, a public interest group that investigates and prosecutes government corruption, recently released a special report based upon examination of new documents in the Clinton Presidential Library in Little Rock, Arkansas. According to the report’s introduction: “Judicial Watch’s research of Clinton Archives has turned-up additional, never-before-seen records detailing Team Clintons’ strong support – both politically and ideologically – for attacking the pro-life movement and aggressively expanding the ‘culture of death,’ especially with public funding.” Below are a couple of excerpts from the Judicial Watch press release but I suggest you also zip over and read the full report as well.

• The Clinton Archives contain a memo from Domestic Policy Council staffer Bill Galston to President Bill Clinton, suggesting the president “lower the public profile” of the administration’s radical pro-abortion policies: “…it is essential to regain our balance on cultural matters. . . . we should not go out of our way to emphasize issues that reinforce the impression that we are somehow outside the cultural mainstream.” Galston specifically cited radical, early moves of the Clinton administration: “. . . gays in the military, political correctness on campus, quotas, and reproductive services contained within a health care proposal.”

• The Galston memo includes a two-page discussion of the Hyde Amendment, weighing legislative tactics, public opinion and political strategy, ending with President Bill Clinton’s handwritten question, “What does Hillary think?” next to the “decision” section of the memo.
Posted by DH at 7:29 AM