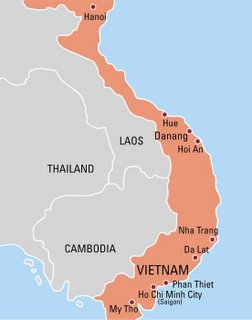 In a move clearly designed to grease the skids for George Bush's first visit to Vietnam, as it hosts the annual Asia-Pacific Economic Cooperation (APEC) summit, the United States State Department has decided to remove Vietnam from its list of countries that severely violate religious freedom. A State official, describing Vietnam's removal from the list as one of Washington's "most significant announcements" of the year, explained that the move came in response to Hanoi's release of religious prisoners and the easing of restrictive laws regarding religious activity.

However, there are serious disagreements with the move. Diem Do, for instance, the chairman of Viet Tan, a reform party that advocates democracy and economic development of Vietnam, argues that the decision is naive and heavily influenced by pro-trade groups. "I think religious persecution is still happening inside Vietnam right now. I don't think all religious prisoners have been released yet, and even if they have released a few or a number of people, that doesn't mean that these people are free."

Furthermore, Do explained that even when released from "formal" prisons, people are often placed under house arrest. "I would say 99 percent of the time when people are released from prison, most often they are put under house arrest for two years, three years, four years after that. What does that mean? That means they simply move you from one prison to another jail."

Even within the U.S. government there are voices dissenting from the move. The U.S. Commission on International Religious Freedom, a panel established under the International Religious Freedom Act, last week urged just last week that the administration NOT remove Vietnam from the "Countries of Particular Concern" list. A letter sent to Condi Rice argued, "Severe restrictions on religious freedom and abuses continue in Vietnam in all of the areas cited by the State Department when Vietnam was designated a CPC (country of particular concern) in 2004."

Ironically, the move cannot make up for what George Bush most wanted to bring to Vietnam; namely, a trade bill that would have awarded Vietnam normal trade relations. The reason for this is that the Congress failed to pass such a bill last week. There are even now frantic efforts being made by some Congressional leaders to bring bilateral trade bill up for a second vote before the President leaves Hanoi.

Would that the State Department, lawmakers, and the President would care more for human rights issues than they do for getting more breaks for supra-national businesses who, of course, have their own habit of turning a deaf ear to human rights issues.
Posted by DH at 10:21 AM