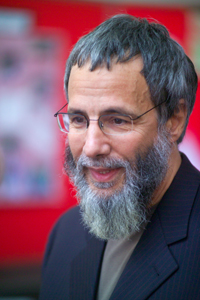 Bruce Bawer, writing in the New York Sun, examines that brand of nuttiness peculiar to the Norwegian Nobel Committee:

The Nobel Peace Prize Concert will be held in Oslo on December 11 and broadcast around the world. The Norwegian Nobel Committee doesn't much care for Americans these days (except for 2002 laureate Jimmy Carter), but it knows who's an international draw and who isn't, and so the concert, as always, is top-loaded with American celebrities. The co-hosts are Sharon Stone and Angelica Huston, and the entertainers scheduled to appear include Lionel Ritchie and Wynonna. Also on the bill is a British singer who calls himself Yusuf.

Does that last name not sound familiar? Well, this is the same guy who used to be known as Yusuf Islam. Still confused? Well, before that he was Cat Stevens, and before that, just for the record, he was Steven Demetre Georgiou. For those who know a bit about Yusuf — who dropped his original name after converting to Islam in 1977 — the invitation from the Nobel Committee came as something of a surprise. Then again, for those who know a bit about the Nobel Committee's politics (this is the same crowd, after all, who publicly regretted giving their 1994 award to Shimon Peres, but not to that year's co-winner, Yasser Arafat), the decision to invite Yusuf to pay tribute in song to this year's prize winner, Muhammad Yunus, was not quite so astonishing.

There is reason to be dismayed by the Norwegian Nobel Committee's anointing of Yusuf. This is, after all, a man who's been denied entry into America and expelled from Israel. After the publication of the fatwa against Salman Rushdie, he was quoted in the New York Times as saying that if Mr. Rushdie came to his door for help, "I might ring somebody who might do more damage to him than he would like. I'd try to phone the Ayatollah Khomeini and tell him exactly where this man is." A Web site called the Jawa Report claims that Yusuf has performed at fund-raising events for charities with connections to terrorist organizations. On the same Web site you can also read claims that he is an intimate of the Islamist Omar Bakri Mohammed and of Sheik Omar Abdel-Rahman, who is now serving a life sentence for terrorist activities...

Read the entire article here.
Posted by DH at 11:35 AM