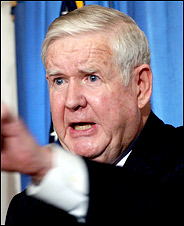 The political read of the day has to be John Fund's WSJ Online column in which he takes a close look at the arrogance, hypocrisy and sheer stupidity of the Democrat's championing of John Murtha. Whether it is corruption, pork-barrel deals and earmarks, or strident anti-war posturing, Murtha is extremely vulnerable on all.

..But several members are privately aghast that Mr. Murtha, a pork-barreling opponent of most House ethics reforms, could become the second most visible symbol of the new Democratic rule. "We are supposed to change business as usual, not put the fox in charge of the henhouse," one Democratic member told me. "It's not just the Abscam scandal of the 1980s that he barely dodged, he's a disaster waiting to happen because of his current behavior," another told me.

As for Abscam, a recent book by George Crile, a producer for CBS's "60 Minutes," provides damning evidence that Mr. Murtha escaped severe punishment for his role in the scandal only because then-Speaker Tip O'Neill arranged for the House Ethics Committee to drop the charges, over the objections of the committee's outside prosecutor. The prosecutor quickly resigned in protest.

Outside observers are equally aghast that Mr. Murtha could win tomorrow's election. Thomas Mann, a Brookings Institution scholar who is co-author of "The Broken Branch: How Congress Is Failing America and How to Get It Back on Track," told the Los Angeles Times that "John Murtha is not the right poster child" for a Democratic House that says it wants to sweep away corruption.

Melanie Sloan, the liberal head of Citizens for Responsibility and Ethics in Washington, was cheered on by Democrats six weeks ago when she helped reveal the Mark Foley scandal. Now she says that "Ms. Pelosi"s endorsement of Rep. Murtha, one of the most unethical members of Congress, show that she may have prioritized ethics reform merely to win votes with no real commitment to changing the culture of corruption"...
Posted by DH at 10:52 AM