Why Vote Republican Next Week?

Yes, we're all disgusted with the compromises, the false promises and the lack of toughness we've seen in way too many Republicans these last several years. And yes, we're re-dedicating ourselves to making these fake conservatives responsible for their failure to represent our interests. 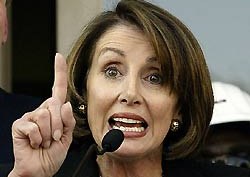 But, do we want Nancy Pelosi as the next House Majority Leader? Of course not. So, expect genuine conservatives to come through with the goods next week...even if those we work to elect don't always do so themselves.

And for a reminder of the positives that have occurred with this Congress with the G.O.P. in control, read through this not-unimpressive list compiled by Mona Charen.
Posted by DH at 12:33 PM