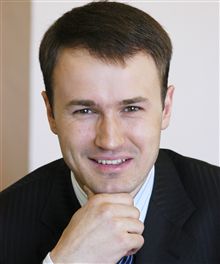 There's been yet another political assassination in Russia. This time it was Dmitri Fotyanov, shown here at left. Fotyanov, a candidate for mayor in the far eastern Russian town of Dalnegorsk, was gunned down just three days before a runoff election.

With this latest act of violence, I thought it important to also revisit the high-visibility murder of journalist Anna Politkovskaya (picture at lower right) and draw from it (and these other crimes) the proper alarm about what is happening under Vladimir Putin's corrupt government. Here are a few articles about the killing of Politkovskaya from, respectively, the Washington Post, Time, the international edition of Der Spiegel, and a particularly good piece by Stephen Brown for FrontPageMag. 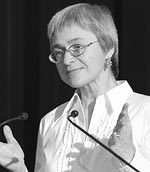 Since 2000, state officials have increasingly stifled the freedoms of press and speech which had just begun to flower in Russia. And those freedoms aren't the only precious thing in danger. In this same time span, more than 20 journalists have been killed.

To illustrate, here is a quick description of the 46 of the politically oriented murders in Russia since 1994. That's right, 46!

In recent years, reporters and opposition political leaders have also been silenced by murder in Belarus and the Ukraine.

Oh, yes; the specter of Communist thuggery is still very much alive in the world. Do not...I repeat, do not trust these guys.
Posted by DH at 10:13 AM