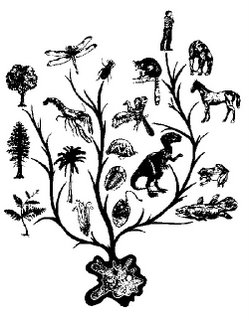 Darwin called his theory "descent with modification." The phrase reflected Darwin's belief that all organisms are modified descendants of a common ancestor that lived in the distant past. The only illustration in Darwin's book The Origin of Species shows the "tree of life" pattern one would expect to find in the fossil record if his theory were true. The common ancestor would come first, as a single species at the base of the tree. Minor differences among individuals would appear first, and these differences would eventually increase until one species had become two or more.

Differences among species would then grow until some species became so different they would be classed as separate genera; genera would diverge to become separate families, families would diverge to become separate orders, and so on. Eventually differences would become so great that where there had originally been one major division or "phylum," there would now be two. Today there are several dozen animal phyla. The major ones include the nematodes (roundworms), annelids (earthworms and leeches), mollusks (clams and snails), arthropods (lobsters and insects), echinoderms (starfish and sea urchins) and chordates (fishes and mammals).

If Darwin's theory were true, then a long accumulation of minor differences must have preceded the major differences we now see among the animal phyla. As Darwin himself wrote, before the different phyla appeared there must have been "vast periods" during which "the world swarmed with living creatures" (Charles Darwin, The Origin of Species, Sixth Edition. New York: D, Appleton, 1890, Chapter Ten, p. 83).

In the fossil record, however, most of the major animal phyla appear fully formed at the beginning of the geological period known as the Cambrian, with no fossil evidence that they branched off from a common ancestor.

Darwin was aware of this, acknowledging in The Origin of Species that "several of the main divisions of the animal kingdom suddenly appear in the lowest known fossiliferous rocks." He called this a "serious" problem which "at present must remain inexplicable; and may be truly urged as a valid argument against the views here entertained" (Charles Darwin, The Origin of Species, Sixth Edition. New York: D, Appleton, 1890, Chapter Ten)

Read the rest of this article, "The Scientific Controversy Over the Cambrian Explosion" created by the Center for Science and Culture/Discovery Institute, right here.
Posted by DH at 7:10 PM