Jerry Springer "Opera" A Sad, Scary Sign of the Times 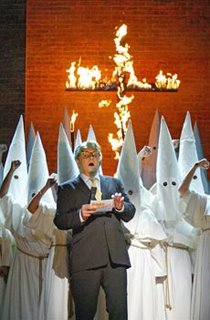 You've no doubt heard of the Jerry Springer Show, one of the trashiest, most offensive, most disturbing television programs ever. You may even have realized that it inspired a satirical "opera" developed by Stewart Lee and Richard Thomas that is every bit as profane and blasphemous.

Despite widespread protests, Jerry Springer: The Opera has played in London, on Broadway and in a multitude of other places, including an Easter Week performance in Cambridge, England, where it drew the attention of a good friend, Ian Cooper, Senior Tutor at Christian Heritage Cambridge.

Is the "opera" mere entertainment, a good-natured (though edgy) farce? Or is it something reflective of a deep and dangerous philosophical shift in Western culture?