Gorbachev Regrets Not Having Yeltsin "Hit" 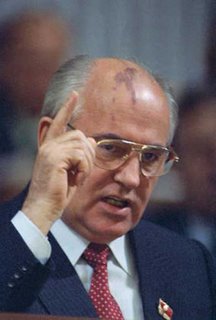 Here's a provocative little article from Reuters aout Mikhail Gorbachev's regrets that he wasn't as tough a Communist thug as the current Russian President, Vladimir Putin. In an especially telling remark, one that he had to hurriedly downplay, Gorbachev (a Nobel Peace Prize winner...choke!...and TIME magazine's 2x Man of the Year) said that his opponents "should have been hit -- I mean confronted with criminal responsibility rather than attacked with machine guns."

Hmm...a bit of a Freudian slip, that.

Notice too the closing sentence of the article. It is a revealing quote from the former KGB triggerman (Putin) expressing his own regrets about the deconstruction of the Soviet empire. It was, he says, "one of the greatest geo-political catastrophes of the 20th century".

I'm telling you again, watch these fellows closely.
Posted by DH at 11:22 AM