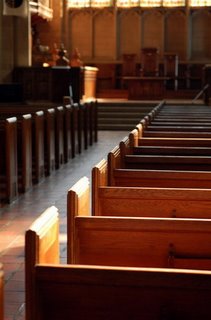 Okay, let's take a look at the modern Episcopalian Church in America.

Its leadership is now on record as standing against biblical inerrancy, salvation through grace alone (via the sacrificial death of Jesus Christ) and the exclusivity of the gospel message. At the same time the modern Episcopalian leadership is in favor of abortion, homosexuality (even among ordained ministers), same-sex marriage and adoption, and now the Frankensteinian practice of destroying human lives in the name of research.

And these folks really wonder why their churches are emptying?
Posted by DH at 10:53 AM