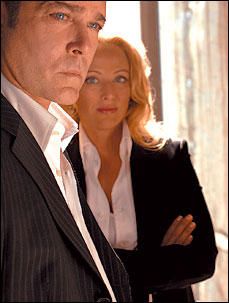 The official description of the new CBS television series "Smith" starring Emmy Award winner Ray Liotta is that the main character stars "as a criminal mastermind in this drama about a close-knit crew of criminals who plot and execute high-stakes robberies. Though Bobby Stevens (Liotta) appears to be a regular family man with a nine-to-five job, he's actually an expert thief who is seeking a few last big jobs so he can finally leave the business for a comfortable, lawful lifestyle with his wife, Hope (Virginia Madsen), and their two children. While they never discuss Bobby's illegal pursuits, Hope is growing weary of turning a blind eye."

Some critics are already singing the praises of the show as a gripping, amoral drama. But the first episode showed the crime team involved in...let's see now...sexual promiscuity, fraud, armed robbery, grand theft, destruction of private and public property, assault with a deadly weapon, and the murder of a security guard at a museum. That, folks, is not amoral behavior; that's immoral behavior.

And to attempt to gloss over these things because Liotta is a handsome man who dotes on his kids and wants to eventually get out of the business (after he's made his millions and perhaps killed a few more innocent people) takes TV irresponsibility to new depths.
Posted by DH at 1:54 AM