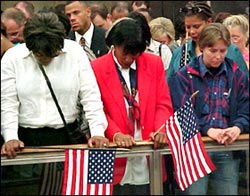 Remember the days following the 9/11/01 terrorist attacks? Remember how those days were marked by prayers, expressions of religious faith, a return to church, and promises to increase the priorty of spiritual values? Well, I'm afraid that the relevant word here is "days" because long before months or even weeks could come round, America's "foxhole faith" had evaporated.

Now, as we near the 5th anniversary of those events, The Barna Group has published a new survey that proves this sad point. The study dealt with information gleaned from nine national surveys and involving more than 8,600 adults. The interviews were taken both before the attacks and at regular intervals since then.

The study shows that despite an intense surge in religious activity and expression in the weeks immediately following 9/11 the faith of Americans is virtually indistinguishable today compared to pre-attack conditions. Barna’s tracking surveys looked at 19 dimensions of spirituality and beliefs. Remarkably, none of those 19 indicators are statistically different from the summer before the attacks!

Here's the rest of the story from The Barna Group.
Posted by DH at 10:11 AM