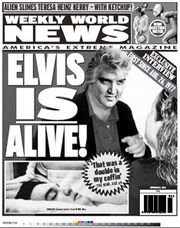 Remember when the mainstream media maligned those obviously "doctored" photos that graced the covers of the National Enquirer and the National Star? Such irresponsible use of photos, argued the MSM, proved the outlandish bias, the lack of character and the paucity of good reporting in these rags.

But nowadays, with the large number of the MSM's own selective, staged and manipulated photos being "outed," the public is certainly right to begin believing there's not very much difference.

Today's story, following on the heels of all those "Reutersgate" pics and yesterday's revelation of CBS' slyly slimming Katie Couric, deals with textbooks and their remarkably crass pretense regarding the disabled.

Jeff Jacoby has the details.
Posted by DH at 5:39 AM