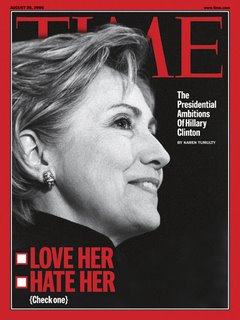 Hillary Rodham Clinton is featured in a flattering black-and-white photo on the cover of Time magazine this week - the 10th cover story for Hillary Clinton since she appeared on the national scene hitched to Bill Clinton's wagon in 1992. That's got to be a record of sorts...

Time treats Hillary Clinton like she was America's Princess Diana, someone we're all supposed to root for because she never got that storybook marriage with the Prince of Arkansas. There'a big problem with the metaphor, however. For all her hatred of land mines, Lady Di never aspired - craved? -- to rule England with an iron fist.

Hillary's long-held desire for the presidency, visible all the way back in the "two-for-one special" co-president talk of 1992, is never portrayed by Time as unseemly ambition. Her ambition is natural. She's a Clinton...

The above are just a couple of excerpts from L. Brent Bozell's penetrating column. You can read the rest of it (and it's a good one) on this page of the Media Research Center website.
Posted by DH at 2:15 AM