Has the Media No Shame? BBC Photographer Puts Child in Harm's Way for a More Dramatic Shot 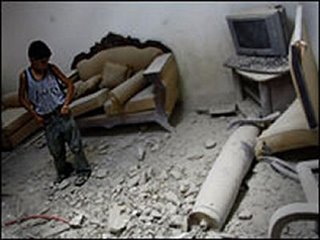 The bias against Israel and in favor of Hezbollah terrorists as reflected by many MSM photographers (to the point of staging and even "doctoring" photos) continues apace. Note the picture on the right with the little boy standing beside an unexploded bomb...a position that at least the poor kid considered dangerous but which he was forced into by photographers wanting a dramatic shot!

Read the rest of this story at the NewsBusters blog.
Posted by DH at 11:34 AM