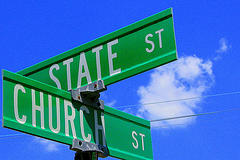 Amy Sullivan is no conservative. And Slate is no conservative web site. Nevertheless, Ms. Sullivan's article appearing in Slate a couple of days ago dared to deliver some very bad news for Democrats. Specifically, she challenged the Party to realize the seriousness of their problems with religious voters.

But what can Democrats do?

It is very, very difficult to get voters to believe you're truly religious when yet you enthusiastically endorse abortion (even partial-birth abortion), homosexual marriage, euthanasia, no controls of indecency in the media or public square, no-fault divorce, the monopoly of government education, prohibition of religious displays, and so on.

But the failure of Republicans to show fruit of their own promises to religious voters is having an effect there too.

...Miss Sullivan writes that two years ago half of all Democrats thought their party was "friendly to religion." Today, only 39.6 percent of identified Democrats agree.

Sullivan reports that the numbers of black Democrats who see their party as welcoming people of faith is down 14 percent since 2004. Ditto Catholic Democrats. Sixteen percent fewer Catholics agree with their own party's position on matters of faith in the Pew Poll, Miss Sullivan writes.

Should the GOP be crying "Hallelujah!" Not so fast. The Pew Poll shows that support for Republicans among Evangelical voters is also down--eight percent. Sullivan attributes that fall-off to "two years of broken promises." There have been too many broken promises. President Bush's support for Plan B is the most recent, most egregious example..
Posted by DH at 3:51 PM