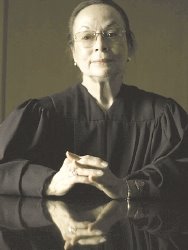 You've, of course, read the headlines about District Judge Anna Diggs Taylor's decision to strike down our national security monitoring practices. But did the MSM stories underneath those headlines tell you all of the story? You know they didn't.

However, Bob Novak in this Town Hall column does give you a few...and they're anything but trivial. For instance, don't you think the media should have mentioned that Taylor is one of the most activist liberal judges in the nation, one with a reputation for shoddy thinking but coercive designs? Or what about the fact that her former husband (whose congressional office she ran until 1971) ended up in prison for taking kickbacks?

And don't you think one of the network news anchors might have mentioned (after the conservative blog, Judicial Watch, first uncovered the fact) that Judge Taylor was responsible for contributions to an organization that was a plaintiff in the case she decided? Good grief!

You know, Jimmy Carter is blamed for a whole lot of our nation's ills...and rightfully so. But, amid that long list, you should certainly make room for his decision to appoint Anna Diggs Taylor to the bench. It certainly belongs.

And do read Bob Novak's column. It is an exasperating but very revealing look at the modern day Democrat Party -- and it's primary ally, the compliant liberal press.
Posted by DH at 11:48 AM