When Hollywood Gets It Wrong 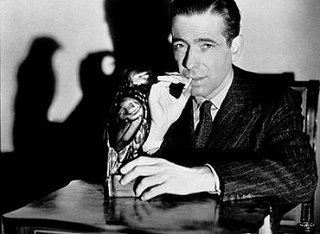 One of my favorite movies is the classic 1941 detective film, The Maltese Falcon, starring Humphrey Bogart, Sydney Greenstreet and Mary Astor. The movie is set in the foggy ambiance of San Francisco with one particularly dramatic scene portrayed in the city’s wharf district where the freighter La Paloma is set ablaze. It’s a great scene. However, the "willing suspension of disbelief" so necessary for moviemaking magic is somewhat punctured if the viewer notices that, above the door of this supposedly-San Francisco setting, there's a large sign reading “Port of Los Angeles!”

It is, of course, just one of the myriad of movie mistakes which are sprinkled throughout Hollywood’s history. In fact, one of my favorites appears in this same film. In this scene, Humphrey Bogart is slapping Peter Lorre around. Now Bogie’s reputation as a tough guy is a matter of record, but is he really tough enough to slap the spots off a mug’s necktie? According to this film, he is. Because near the movie’s climax, Bogie resorts to backhanding Peter Lorre who happens to be wearing a polka-dot tie. But when Bogie slaps him back to the right, Lorre’s tie has now become a striped one!

These examples of “film flubs” are humorous and harmless, of course, but Hollywood gets it wrong in many more important ways than allowing the occasional wristwatch on a Roman soldier or portraying Geronimo wearing tennis shoes. No, the momentous errors of Hollywood films concern matters of morality. These errors, I'm afraid, are quite deliberate reflecting the passionate liberalism of Hollywood propagandists unrestrained by religious convictions or fact-based accountability of any sort.

And make no mistake, through their alluring, ubiquitous influence, these Hollywood “artists” are changing the whole world. As veteran media critic Michael Medved once wrote, “Unlike political office holders…top producers and powerful stars never face the righteous wrath of angry voters – and so [they] cheerfully ignore the real divisions in America. While both houses of Congress painfully reflect those divisions, Hollywood remains unanimously liberal, adolescent and indulgent.”

Let’s take a closer look. Whether it is in the voting preferences of writers, producers and directors (about 85% of them voted for Bill Clinton); or the outspokenness of Hollywood’s glitterati for such causes as abortion, environmental extremism, and homosexuality; or in the notoriously loose lifestyles of drug use, sexual promiscuity, divorce and the exorbitant luxury for which Tinsel Town is famous; the evidence of Hollywood’s persistent movement away from biblical values is obvious.

Certainly the films themselves illustrate a disdain for decency. Note the schlock produced in wave after wave of titillation-themed comedies and gory thrillers featuring psychopaths, zombies, sexual/serial killers, and cannibals. Of course, there are more subtle promotions of decadence and leftist political ideologies too. Such films, are often among the most heralded, most awarded, and most popular. Therefore, their power is all the greater to change the way the world thinks – one audience at a time.

For instance, Academy Award-winning films of the last decade have carried carefully crafted messages defending and promoting euthanasia, blasphemy, illicit heterosexuality, homosexuality, cross-dressing, vengeance, divorce, abortion, and numerous anti-American sentiments. Some times the propaganda “spin” of these issues is obvious, but because they are contained in an otherwise entertaining package, people still tend to accept them. This is a telling illustration of the shaping power of the medium. But, at other times, moviegoers are so naïve enough about the influences at work on their minds that they miss altogether the subtler messages therein.

An example? A few years ago I did a "Vital Signs" radio program about the blockbuster film, Titanic. As you remember, many conservative Christians became enthusiastic participants in the crowds that poured into America’s theaters to see the flick -- even though it lavishly portrayed fornication as beautiful, liberating, and even ennobling. That followers of Christ were so easily entertained by such lies should be alarming enough. But what of the additional error involved in Titanic’s political message; namely, the overt emphasis on class warfare? Not one of my friends who saw the film even mentioned this emphasis. Not having seen the movie, I admit I defer to judgments made by people like Michael Medved about the film’s overt Marxism. But Titanic’s leftist philosophy must have been pretty heavy. After all, the censorious Communist Chinese listed Titanic as one of only ten foreign films they allowed to be shown in their country that year. The Chinese President even took the trouble to publicly praise Titanic for its moving message of class warfare, Communist-style.

Why was this political perspective so ignored by American moviegoers, including those Christians who, in other settings, would not have tolerated being indoctrinated with such unbiblical philosophies?

The answer to the above question must honestly take into account the mindless devotion that Americans have to entertainment, especially when it comes via their movies and TV. It has become just too much trouble for us to entertain ourselves and thus even religious believers slavishly join the lines in front of the theaters (or pop in Hollywood's latest productions in their in-home video system). “Entertain me,” we say to Hollywood’s leftist powers that be. “Mind you, I won’t put up with everything you want to sell me. I'll only tolerate nudity, cursing, nasty jokes, gory violence, sexual deviancy, attacks on parental authority, the habitual dissing of conservative Christianity, and a few others. And I probably should should tell you those things bother me a bit...but, well, not as much as they used to. So okay then, here’s my money…and my time…and my mind. Entertain me!”

Too harsh a scenario? I’m afraid not. American Christians, especially in the 45 and younger category, are regularly attending movies that not only feature but actually glorify immorality. And the movie-makers do so with the most ingenious propaganda techniques known to man.

You know exactly what I’m talking about -- the manipulation of artistic propagandists who use good looking actors, emotional situations, music, clever writing, etc., to move you to places you know you shouldn’t be. For instance, you really get into a movie and find yourself wishing the protagonist leaves his wife for the more attractive “other woman." Or perhaps its a movie that produces vicarious thrills when the hero pulls the trigger and wreaks his personal vengeance on the bad guy. Or maybe you find yourself lured into sympathies with moral positions that, if faced in any other context would elicit your firm opposition. Guys, this is the magic of movie-making at work. And its not a good magic. Make no mistake, if you regularly subject yourselves to such skillful, purposeful manipulation you cannot help but have your sensibilities and sensitivities changed.

So, let’s face it. Hollywood is getting it wrong big time in its presentations of sexuality, booze, political philosophy, the sanctity of human life, the nobility of labor, the sacredness of a nuclear family, the grievous harms that come from scatological and blasphemous speech, modesty and social propriety, the satisfaction promised by materialism, intelligent design in creation, secular solutions to the world’s woes, and so much more. And, using the seductive power of their films, Hollywood is influencing even God’s people who, in their supposed need to be entertained, trade away their spiritual discernment and their responsibility to submit all things to the Lordship of Christ.

As I said earlier, some of Hollywood's "film flubs" are humorous and quite harmless. Bogie slapping the polka-dots off Peter Lorre’s tie is just such an innocent (and charming) mistake. But other Hollywood errors are purposeful and sinister -- and they stand defiantly against the basic elements of Christian orthodoxy.

Our entertainment mustn't come at such a price.
Posted by DH at 4:32 PM