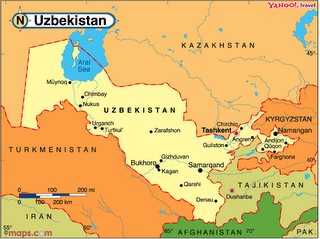 From Compass Direct News, an outlet primarily for news reports of persecution against religious believers, comes this report:

Uzbekistan has closed down another Western-funded aid agency, ordering the complete liquidation of the Central Asian Free Exchange (CAFE) and ouster of its foreign staff.

A final appellate court judgment against CAFE was handed down by Tashkent courts on July 11, less than four months after a rash of local court cases were launched against branch CAFE offices in six cities across Uzbekistan.

Like 20 other humanitarian groups closed down on scant hearsay evidence within the past two years by the authoritarian Central Asian state, CAFE was charged with a list of various procedural laws it had allegedly violated.

But the most serious accusation against CAFE was that the nonprofit group was doing covert missionary work among Uzbekistan’s predominantly Muslim citizens. Due to “conditions in Uzbekistan,” the lengthy verdict claimed, “missionary activity will have fatal consequences.”

Here is the rest of this sad story of intolerance and bigotry.
Posted by DH at 10:25 AM