A Patriotic Movie from Oliver Stone? 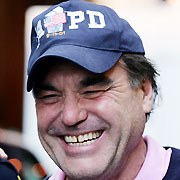 Now, I'm not a movie-goer anyhow but, even if I were, I don't think that Cal Thomas' recommendation (as much as I respect and appreciate him) would be enough to pull me into a theater to see World Trade Center. My memories of Stone's unchecked leftism over the last couple of decades, his irrational passion for conspiracy theories, and his astounding addiction to distorting history in order to sell the world his own loopy ideologies, are just too present. So, yeah; I'll be taking a pass on Ollie's new flick.

But, hey -- whether you intend to see it or not, Cal Thomas' column about the movie is like all of his other stuff: timely, interesting and well worth your time.
Posted by DH at 2:04 PM