The Erratic Tom Davis Wins "Porker of the Month" Award 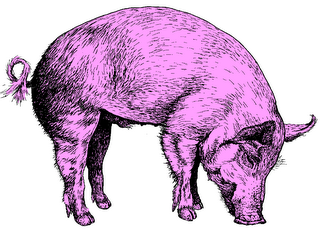 Republican Congressman Tom Davis is a conservative-leaning libertarian but one who has a mixed record on both social issues and spending priorities. For instance, he generally votes with the Congress' pro-life bloc but, like others, he was inconsistent enough in his own philosophy to vote for more embryonic stem cell funding last week. He has further disappointed conservatives by voting against vouchers for private schools and by promoting increased privileges for homosexuals, thus earning fulsome praise and support from the Log Cabin Republicans.

Davis can be very erratic in other areas too. He has strangely inconsistent records on energy, environment, tax reform, election reform, and so on. Even on spending, Davis keeps causing his colleagues to scratch their heads in confusion. For example, he has voted for a balanced budget amendment, for line item veto power, and has a 93% record with the Chamber of Commerce, indicating a strong pro-business perspective. But, in contrast, Tom Davis has supported many of the "most boondoggley" pork projects coming out of Congress. Indeed, one of them, a federal bailout of the Washington, D.C. Metro system, has seen Davis as a key leader.

The bailout is a hefty one: $1.5 billion over 10 years. And this is all on top of the $6.2 billion Congress has already given to the bumbling, stumbling transit authority in 3 other bailouts since 1967. And note this too -- this latest rip-off of taxpayer money comes in spite of a series of reports in the Washington Post last summer revealing how the transit folks managed to mismanage $1 billion!

And so... for leading the way for this exchange of money from your pocket to those of the D.C. transit system, the Citizens Against Government Waste (CAGW) has "awarded" Tom Davis the dubious distinction of being its "Porker of the Month."

You can read the rest of the CAGW's commentary about Davis' pet pork project right here.
Posted by DH at 11:50 AM