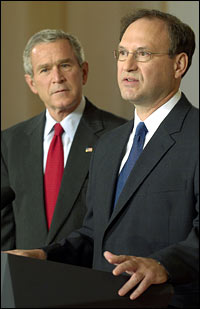 Here's the Washington Post story about the Supreme Court's decision to review a second partial-birth abortion ban -- both of which had been declared unconstitutional by other courts. It is certainly a cause for hope that the Court is willing to even look at these cases and with Bush appointments Roberts and Alito on board, pro-life advocates have higher hopes than ever.

But it must never be forgotten that the Supreme Court isn't really so Supreme. There is a higher, truer court whose judgments will last forever. No appeals; no escape; no squawks. Therefore, let's step up our prayers to He Who sits on that eternal throne and ask that the scourge of abortion be finally removed from our land.
Posted by DH at 3:31 PM