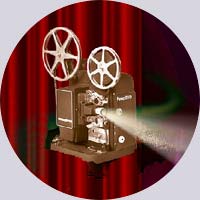 Vincent over at World Magazine Blog shares this tidbit -- "The theme of a PG-rated film may itself call for parental guidance," reads the Motion Picture Association of America's online explanation its rating system. "There may be some profanity in these films. There may be some violence or brief nudity. ... The PG rating, suggesting parental guidance, is thus an alert for examination of a film by parents before deciding on its viewing by their children. Obviously such a line is difficult to draw."

Now the MPAA has drawn the line at overt Christianity, awarding a PG rating to "Facing the Giants," a gentle film about a burned-out, depressed football coach at a Christian high school, whose life takes a miraculous turn for the better. While there's none of the usual PG-worthy stuff in the movie, the MPAA said the film's strong Christian content may offend people of other religions. Said Kris Fuhr, vice president for marketing at Provident Films, which is owned by Sony Pictures: "It is kind of interesting that faith has joined that list of deadly sins that the MPAA board wants to warn parents to worry about."
Posted by DH at 10:17 AM