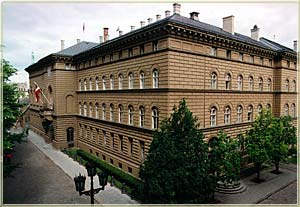 As this report in the BBC described it, Lawmakers in Latvia have defied the European Union and refused to introduce a law banning discrimination at work on sexual orientation grounds. Agreeing to introduce the law on employment discrimination was a condition for Latvia's accession to the European Union in 2004. But MPs refused to implement it in full after a parliamentary debate where homosexuality was described as a sin.

In another reaction, World Congress of Families founder, Dr. Allan Carlson, commended the Latvian parliament for standing firm for family values. "Once homosexuals are recognized as a protected class for anti-discrimination purposes, demands for same-sex marriage and efforts to criminalize criticism of homosexuality will follow - exactly what's happened in Western Europe. It's not about anti-discrimination, but thought-control and forced association."

The Latvian parliament amended the country's constitution to protect traditional marriage in November of last year, setting off fireworks aplenty among homosexual enthusiasts throught Europe. The International Lesbian and Gay Association has even demanded (in its oh-so-tolerant whining) that the EU severely punish Latvia for their action, including even jettisoning them from the Union.