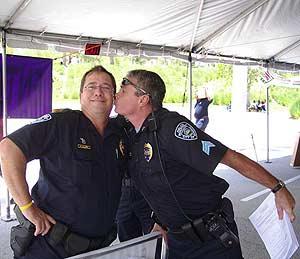 In Sunrise, Florida, an off-duty but uniformed cop decided he didn't like Promise Keepers presenting petitions to ban homosexual marriage. A little thing like the U.S. Constitution and its protection of free speech didn't matter to Sgt. Stephen Allen, an 11-year veteran of the force, nor was he deterred from his illegal harassment of the Christians by the fact that they had already obtained permission and paid $800 for a booth for the event. So he began taunting them, challenging them and ended up threatening to have them arrested if they didn't stop gathering signatures.

Allen, apparently accompanied by other off-duty but uniformed (and armed) policemen made fun of the effort and then actually removed the petitions from the table. He accused one of the Christians (lawyer John Stemberger) of lying about being a lawyer and then threatened to put him under arrest before an intervention by a city official finally caused the bullies to leave.

'The very first thing [Allen] said was `Jesus said nothing about homosexuality in the New Testament,' '' Stemberger said. ``He wouldn't let me speak.

This story from the Miami Herald is a real eye-opener as is the photo which ran beside it (shown at the above right) which shows Allen kissing another cop, Detective Mike Allard. The smooch was performed at the event, as disrespectful and unprofessional a way to mock the Promise Keepers as one can imagine.

If you'd like to send a postcard to the Sunrise Police Department and/or the Mayor letting them know how you feel about such unjust and heavy-handed harassment, please use the addresses below.