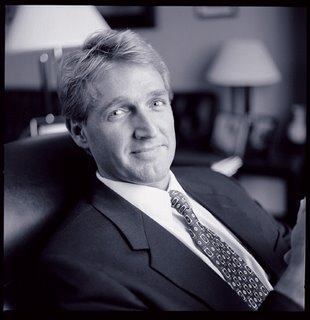 Republican/Libertarian Congressman Jeff Flake is driving his colleagues crazy. You see, he dares to act on the principles they only espouse. In particular, Rep. Flake is shining the light on the Congress' out-of-control spending and how even the Republicans are cheating taxpayers by funding pork projects -- and doing their best to keep their irresponsibility behind closed doors.

One of Jeff Flake's recent actions (proposing several cost-cutting amendments to the DOD's Appropriations Act) drew a more rancorous reaction than usual, However, it also drew special praise from the Citizens Against Government Waste. Check that story out right here.

And while you're on the subject, take a look at the Wall Street Journal editorial from last month about Congressman Flake. It is a very interesting read.

And one more thing -- so-called libertarians generally refuse to deal with such "social issues" as abortion in the political arena. Indeed, many come down decideldy for unrestricted abortion. But Congressman Jeff Flake refuses to fit into this mold either. Below is a quick review of his House record on the issue:

If you'd like to send along a "thank-you" to Congressman Jeff Flake both for his pro-life voting record and his brave willingness to buck the system in order to save taxpayer's some money, then here are a couple of addresses:

E-mail Address
Congressman Flake's constituents can email him at jeff.flake@mail.house.gov.
Posted by DH at 4:19 PM