Whatever Happened To Promise Keepers? 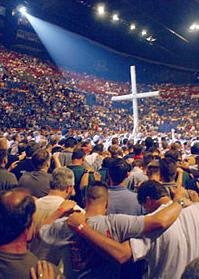 Promise Keepers certainly isn't making the national splash it once did.

The absence of the outspoken, charismatic Coach Bill McCartney at the helm of Promise Keepers left the movement without its initial fervor and its ability to grab the headlines. The football arenas around the country haven't been filled with attentive worshipers for a long time now and Promise Keepers' hope to create thousands of "accountability groups" among America's Christian men never really materialized.

However, neither of these failures are the fault of Promise Keepers as an organization. The real problems in reaching the organization's goals have come from all the "regular suspects" which have historically limited the Christian man's spirituality in America: apathy, inconsistency, improper passions, desires for comfort and entertainment, and so on. Promise Keepers did an incredible job of shaking things up in the early 90's -- God bless 'em for their vision and dedication to biblical orthodoxy. But keeping things shook up? Well, that required the rest of us to follow through with courage, faith and an aggressive work ethic for the Kingdom. We didn't.

So, is Promise Keepers completely a thing of the past? No, far from it. Their audience events may be smaller, fewer and less publicized but the organization is very much alive with enthusiasm and commitment. And, of particular significance, Promise Keepers hasn't sold out its founding purposes. When the numbers began to decline, there must have been tremendous pressure brought upon Promise Keepers to compromise its values, to soften its doctrinal statement, to pragmatically remove (or at least keep quiet about) some of its more controversial elements, especially its insistence on preaching Christ crucified, its pro-life convictions, its fidelity to biblical teachings on marriage and sexuality, etc. But Promise Keepers kept its own promise to God and therefore deserves our fervent appreciation and respect.

And they deserve our present attention too.

For although the "movement" of Promise Keepers (amazingly influential) has run its course, the ministry of the modern version of Promise Keepers is very much alive. Clicking on the title of this post will take you to the Promise Keepers web site where a visitor can see how true the organization has been to the Lord Jesus and how active they yet are in changing the character of America by bringing redemption, illumination and spiritual power to one man at a time.

So, for those of you who well remember the way God moved you in one of those PK stadium rallies and for those of you whose earnest spiritual adventure began after those halcyon days, today's Promise Keepers is a ministry well worth your prayers, your support and your participation.
Posted by DH at 10:15 AM