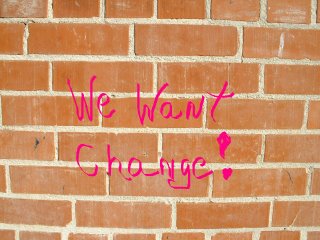 Two Belarusian young men, Artur Finkevich and Mikita Sasim, began their trials Friday in Minsk and Baranivichy, respectively, for anti-government actions. And in totalitarian Belarus where Alexander Lukashenka demands unquestioned submission, such "crimes" are quite serious. Finkevich was arrested in Minsk last January for writing "We Want Change!" on a wall. State police are blaming Finkevich for the appearance of dozens of other graffiti expressing similar slogans. If found guilty, Finkevich faces a sentence of 7 to 12 years in prison.

Sasim faces a 3-year sentence for allegedly dodging Belarus' compulsory military service. Sasim's lack of enthusiasm for such service could be related to any one of a number of the unjust, repressive actions taken by the Communist government which rules his nation. However, the most relevant factor is the severe beating Sasim took last year after he was arrested during a protest against the many political disappearances that have taken place in Belarus. He was subsequently hospitalized with a head injury and therefore missed his draft term. This trial, therefore, is but a way for the State to extend their persecution of a political dissident.
Posted by DH at 3:13 PM