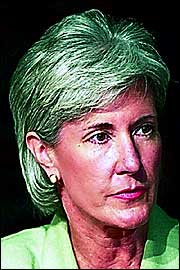 In Kansas, the pro-abortion governor managed to hold on to her veto of a law passed by the state's legislators which would have required the state to collect relevant medical information about late-term abortions, such as the woman’s health, fetal abnormalities and the physician who authorized the abortion. The data would have been submitted to state health officials, and no identifying information would be released.

But abortionists must be protected from the light of day as well as the light of justice and so Democrat Governor Kathleen Sebelius vetoed the bill last week.

According to the Kansas City Star that decision "angered some lawmakers who said the bill would allow the state to determine whether state laws are being followed and would not result in any privacy violations. Abortions after the 22nd week are prohibited by law unless a physician concludes that the woman’s health is at stake. Anti-abortion lawmakers suspect that too many physicians use a mental-health exception to authorize abortions."
Posted by DH at 9:08 AM