May We Never Forget Chappaquiddick 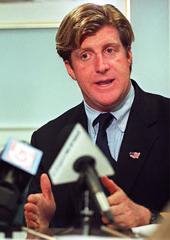 Everyone should now be aware of the latest incident in the bizzaro world of the Kennedy's; namely, the preferential treatment given to Patrick Kennedy after driving under the influence, crashing his car into a Capitol Hill security barricade, and attempting to duck the issue until forced by the news media.

Does it sound eerily familiar? Of course, it does -- although, no thanks to Patrick himself, there wasn't a fatality this time around.

Indeed, Patrick's exploitation of privilege, his cowardice, his attempted manipulation of the press, his glaringly unsuccessful portrayal of himself as victim, his dishonesty regarding the cause of the accident, and the arrogant stupidity of getting behind the wheel when drunk (or loopy from other drugs, as he now claims), all are haunting reminders of his father's tragic actions at Chappaquiddick. 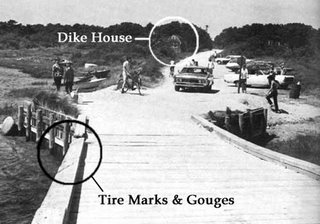 And, yes...we should never forget Chappaquiddick: its victim, its perpetrator, and the cost to a society that not only allows such injustice but, if you're part of the elite, actually rewards it.

Therefore, here's a few sites to look through which illuminate Ted Kennedy's actions of July 1969, revealing the cruel injustice that was (and is) largely ignored by the mainstream media. 1) A detailed review of Chappaquiddick and its cover-up from YTedK, a Ted Kennedy expose' site; 2) A Jeff Jacoby column; and 3) A Myrna Blyth NRO column.
Posted by DH at 5:33 PM