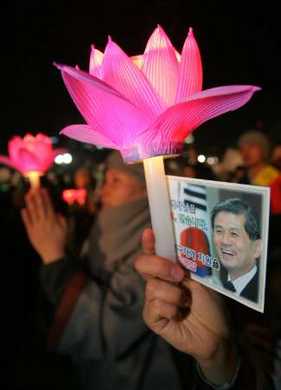 Okay, so Hwang Woo-Suk has been proven a liar, a cheat and an incompetent scientist. And, yes, his experiments involved the uncaring exploitation of tiny human beings. But are those reasons enough for a group of Korea's Buddhists to stop being loyal fans? I guess not. In fact, they're ready to put up $64,500,000 of their "karma cash" to get Hwang back in the lab!

You can't make this stuff up, guys.

Here are some choice excerpts from the Yahoo News story...

South Korean Buddhists have offered more than 60 million dollars to allow disgraced stem cell expert Hwang Woo-Suk to resume his research, a senior monk has said. The head monk of a Buddhist temple and two Buddhist business leaders have put together 60 billion won (64.5 million dollars), mostly in cash, to allow Hwang to set up a laboratory and continue his work, Seol Jeong, a senior Buddhist monk, said on Monday.

Hwang was sacked from his university post and banned from conducting research in March after a panel of experts found that he had faked his landmark work on stem cells. South Korean prosecutors are expected to announce later this month the findings of a four-month-old investigation into Hwang's fraudulent research and alleged misuse of millions of dollars in research funds...

...Seol Jeong said when Hwang had met him in private, the embattled scientist had "repented of his misconduct". "No matter what happened to him, however, we cannot deny his technology is something unique internationally," Seol Jeong said. "Once the investigation is over and done with, he will be able to turn his attention to research and meet the expectations of the people..."

...Buddhists have been amongst Hwang's staunchest allies since his fall from grace began late last year. Hwang has said in the past that he is a practicing Buddhist and spent time sheltering in a Buddhist monastery while a probe of his alleged misconduct began.

But not all of South Korea's estimated 12 million Buddhists support the discredited scientist. "(Hwang's research) runs against the Buddhism's view of the world and its philosophy," said Do Beop, a former head of Silsang Buddhist Temple in the southern city of Namwon. "The attempts to extend the human life will only magnify the crisis of the modern world, which stems from the egoistic desire of human beings," he said on a radio interview...

...But Hwang still commends respect among many supporters who have been staging daily protests at the Seoul National University or carrying out candle light vigils here and in other provincial cities, calling for his rehabilitation.
Posted by DH at 11:41 PM