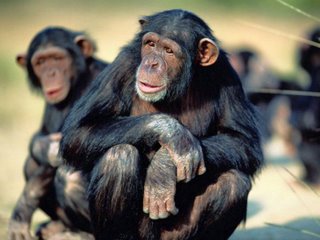 Veteran journalist Robert Duncan writes from Spain about how the Socialist Party there is moving to guarantee "human rights" to monkeys. You can't make this stuff up, you know?

After changing the definition of marriage by passing same-sex “marriage” legislation last year, now the Spanish government is bent on changing the very definition of “human.” Once again, the Spanish Socialist government is showing where its true priorities are – and it’s not about Iraq, nor immigration, and it’s certainly not about helping families. Instead, the Socialists are in a bother about … monkeys.

Spain’s Socialists want monkeys “to be immediately included in the same category as people.” The party presented this week in Spain’s Parliament a project for simians to have “Human Rights.” The Socialist argument is based on the calculation that men and monkeys have roughly 98 percent of their genes in common.

The Socialists want the initiative to be picked up by the United Nations. One wonders if the Socialists are also guilty of accepting banana kickbacks.

The Archbishop of Pamplona, Fernando Sebastian wryly noted, “Just to be progressive, one doesn’t have to be ridiculous.” Sebastian added, “monkeys should have monkey rights, because to do otherwise would be like asking taurine rights for humans.” According to the Socialists, the classifying of monkeys as people would grant them “the moral and legal protection that currently only human beings have...”
Posted by DH at 12:52 PM