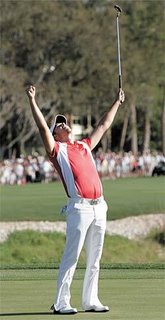 The source of his inspiration was a favorite Bible verse, 2 Timothy 1:7. The crucial words from that passage, he said, are “power, love and a strong mind.” Those words, Baddeley said, calmed his spirit and gave him peace.

“Then I said to myself, ‘This is for you, Jesus,’ and knocked (the winning putt) in,” he said.

And just like that, Baddeley not only won the Verizon Heritage for his first PGA Tour title after four winless years, but completed an image makeover almost as long in coming...

...His clutch 7-footer for par to finish 15-under, a shot ahead of gritty Jim Furyk, came at the end of a taut, daylong, one-on-one duel. No one else got closer than a shot. Vaughn Taylor and Billy Mayfair finished two shots back at 13-under, and Jerry Kelly and former USC player Brett Quigley were at 11-under.

It was a breakthrough day for Baddeley, but he said his journey to the winner’s circle was much longer in the making. “An amazing week,” he said. “It’s a win; it’s a relief. But it’s a dream, a goal that’s been reached. So it’s very satisfying.”

Start with his 5-under 66 on Saturday — the first anniversary of his marriage — which vaulted him into a tie for the lead with Furyk, the 2003 U.S. Open champion and winner of 10 PGA Tour titles.

Then there was a 7:30 a.m. Easter Sunday service, held at that same 18th green, where the 25-year-old gave testimony about how his Christian faith helped him confront his self doubt. Afterward, Baddeley and his wife, Richelle, “power-walked” for an hour in Sea Pines Resort to clear his mind for the task ahead. “He’s worked so hard,” said Richelle, who met Baddeley in Scottsdale, Ariz., where they now live. “We knew (winning) would come. And 10 hours (after the 18th-hole service), here we are holding the trophy.”

His faith, Baddeley said, has helped him deal with pressures since he was 13. As a young golf star growing up in Australia, “I struggled for three or four years, didn’t live up to my expectations and (those) of other people,” he said. “It was frustrating at times and hard at times, but I really felt my relationship with the Lord helped get me through that.”

It wasn’t always a smooth passage. Three years ago Baddeley was best known in the U.S. for a TV commercial for MacGregor golf clubs in which the then-shaggy-haired player drove a convertible with three young women waving their arms in the air and chanting his nickname, “Badds!” His portrayal as a womanizing “bad boy” was one Baddeley regrets fostering. “I felt funny going along with that,” he said. “In hindsight I wish I had never done it, but hindsight is 20-20.”

Sunday, that image was as dead as Baddeley’s other reputation: as a player with more style than substance, one who hadn’t won despite a pair of runner-up finishes...

Gilliespie's is a good story. But if you'd like the "Badds story," click the title of this post to go to Aaron Baddeley's own web site to see just how bold is his testimony for Jesus Christ, complete with his conversion account, daily Scripture readings, an explanation of his Bible study technique (SOAPS), and more. Congratulations, Badds!
Posted by DH at 6:18 AM